Sardar Vallabhbhai Patel University of Agriculture and Technology established as a full-fledged University has unique honour of being called “First Agriculture University of the third millennium and the 21st century". It is committed to a unique mandate of integrating education research and extension so as to serve the rural people. The University was established on 2ndOctober 2000 under Uttar Pradesh Agriculture University Act (revised) 1958 gazette and notified vide 3204A/X12-8-2000. It was inaugurated on 28th March, 2002 by the Honorable Chief Minister of Uttar Pradesh. It is recognized and funded by U.P. Govt. & ICAR, Govt. of India.

The U.P Government has given the responsibility of all around development of the agriculture and rural community in its four divisions i.e Saharanpur, Meerut, Moradabad and Bareilly which consists of 15 districts i.e Saharanpur, Muzaffarangar, Meerut, Gautam Buddha Nagar, Ghaziabad, Bulandshahr, Baghpat, Bijnor, Jyotiba Phule Nagar, Moradabad, Rampur, Bareilly, Pilibhit, Baduan and Shahjahanpur.

The Krishi Vigyan Kendra, Nagina (Bijnor) was established in April 1992 under administrative control of G.B. Pant University of Ag. and Tech., Pantnagar later on the KVK was transferred to Sardar Vallabhbhai Patel University of Agriculture & Technology, Meerut, after division of U. P. and Uttaranchal. KVK, Nagina (Bijnor) having 13.35 ha total land.

Krishi Vigyan Kendra at Nagina (Bijnor) was launched with the financial assistance of Indian Council of Agriculture Research, New Delhi. The Kendra is situated at Nagina on Haridwar – Moradabad highway, 74 km. from Haridwar and 80 km from Moradabad. The responsibility of the KVK around development of the agriculture and rural community of the district. 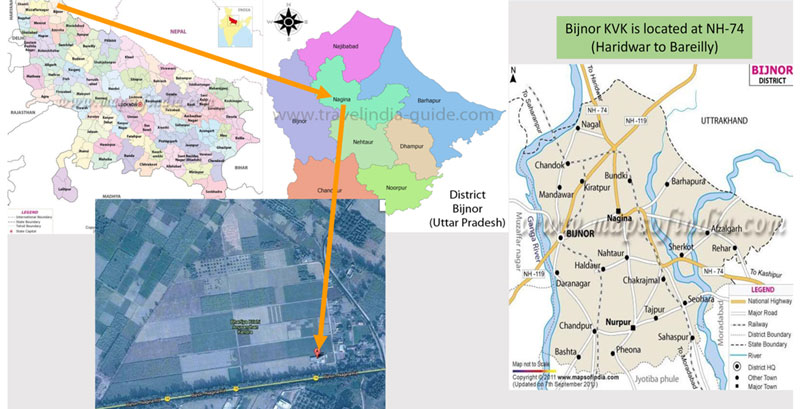